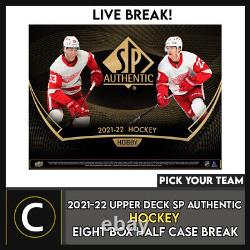 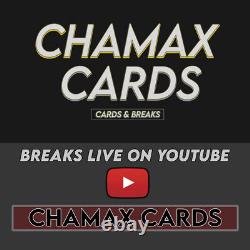 This break will include all 32 NHL teams. YOU'RE NOT PURCHASING A BOX OF CARDS OR INDIVIDUAL CARDS.

If you miss the live break you can go to our YouTube channel, as all breaks will be saved there under the break #. All cards will be given to the team who's logo is on the card. Cards from previous teams such as the Hartford Whalers will go to the Carolina Hurricanes etc. Vintage Winnipeg Jets will remain the Jets. If the card is featuring player(s) in an NHL All-Star game the card will go to the team the player represented that All-Star game.

If a player on a card is featured in the Olympics, or Junior team he will go to the team he currently plays for or if retired the team he played the most NHL games for. A HIT card is a value card that is pulled in a break. We classify a hit card for this product as all cards except standard veteran base cards.

S & Canada via Post. All cards are sent out every Monday.

Collect all four tiers of the Limited Auto Material set (each #'d to 100 or less) and both tiers of the UD Authentics Auto Patch set (both #'d to 49 or less). Many more of the popular SP Authentic insert sets collectors have come to know and love are back, including Sign of the Times, Immortal Ink, Marks of Distinction and SP Chirography.

Also keep an eye out for several individual (including rare, hard-signed Sign of the Times Rookies) and multi-player autograph cards featuring two, three, four, six or eight standout active and/or retired players. There are some incredible pairings! The low-#'d Immortal Ink set features hard-signed autographs from legends of the game. Look for cards from these new insert sets. Pageantry: Features star veterans, top rookies and legends; keep an eye out for hard-signed Auto and Black Auto (#'d 1-of-1) parallels.

The seller is "chamaxcards" and is located in this country: CA. This item can be shipped worldwide.