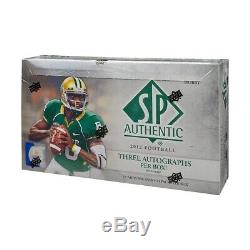 Get Four (4) packs of SP Threads Football inside every case. Each SP Threads pack contains one (1) SP Threads Autographed Jersey or Patch Card. Look for dual, triple and quad autographed Sign of the Times cards numbered to 35 or less.

Collect the entire 280-card set including a remake of 1994 Upper Deck SP (100 cards) and the die-cut parallel. Autographs from rookies and legends like. Autographed Cards (3 per box).

Rookie'Trade' Cards issued by Upper Deck will be good for Andrew Luck! Upper Deck is pleased to announce the company has reached a trading card and autograph deal with Andrew Luck.

Andrew Luck racked up just about every award you could imagine at Stanford and he is continuing to break records in the pros. We know there has been a lot of speculation over who the'Trade Upper Deck' card would be good for and we are thrilled to announce it will be Andrew Luck. Getting his rookie cards into the market for collectors is a top priority for us and signing this deal was the first step to getting that done. Collectors can find these special "Trade Upper Deck" cards in 2011 Exquisite Collection Football, 2012 Upper Deck Football, 2012 SPx Football, 2012 SP Authentic Football and the newly released 2012 Exquisite Collection Football. With the deal in place and designs completed for many of the cards, Upper Deck can move forward with the production process to bring them to life.

Upper Deck will share more details on these highly anticipated Andrew Luck trading cards as they near completion. We do not mark merchandise values below value or mark items as. "Gifts" US and International government regulations prohibit such. The item "2012 Upper Deck SP Authentic Football Hobby Box Russell Wilson RC" is in sale since Tuesday, April 7, 2020. This item is in the category "Sports Mem, Cards & Fan Shop\Sports Trading Cards\Football Cards".