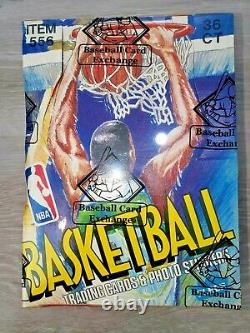 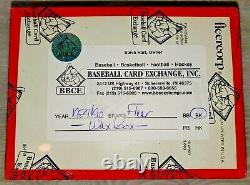 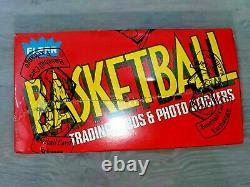 Brand new box, never opened, stored since inception in smoke free home. A gorgeous BBCE wrapped and inspected 1989 Fleer Basketball Box. These boxes are becoming extremely rare as activity to break unopened vintage material has boomed! Whether you plan to open or hold as an investment, you are safest with BBCE. Unopened, brand new and possible Michael Jordan, Patrick Ewing, Larry Bird, Kareem Abdul-Jabbar and many others waiting inside. Stored in smoke free home. Not only is the box in Mint condition, the box has been in storage and in smoke free home. Fleer's third-consecutive annual basketball issue grew a bit in size, from 132 to 168 cards. The set is dense with hall of fame talent, and while the rookie crop is not as strong as years past, still contained Reggie Lewis, Mitch Richmond, Rod Strickland, Kevin Johnson and others.

Again an 11-piece sticker set accompanied cards at a rate of one sticker per pack. This also appears to be the last Fleer basketball set that was printed on a somewhat limited basis. Jordan had laid the groundwork for his legend by 1989.

Leading the league in scoring, a feat he would accomplish 10 times in his career, became protocol. His dominance was on full display.

He also orchestrated one of the most iconic plays in NBA history with "The Shot, " the incredible buzzer-beater that edged out the Cavaliers in Game 5 of the 1989 Eastern Conference playoffs. But back to the card...

Considering this is a spectacular action shot of Jordan doing what he did best, and during a period when he was absolutely crushing the competition, this is a steal. Keep in mind, centering can be tricky with this card. Michael Jeffrey Jordan (February 17, 1963-) is widely considered the greatest basketball player in the history of the NBA, with all due respect to Kareem, Wilt, Jerry West, Bill Russell and many others. After starring in high school, Jordan was highly recruited by North Carolinas legendary coach, Dean Smith, where he led the Tar Heels to the 1983 NCAA National Championship over Georgetown.

The Chicago Bulls drafted Michael Jordan as the third overall pick in the 1984 NBA Draft, behind Hall of Famer Hakeem Olajuwon and Sam Bowie. During his rookie season, Jordan made his first Sports Illustrated cover Jordan was the subject of a record 60 SI covers. And was named to his first of 14 NBA All-Star Games (named All-Star Game MVP three times 1988, 1996, 1998). His second season, marred by a broken foot early on, was highlighted by a 63-point game against the Boston Celtics in the NBA playoffs. This was a turning point in MJs career; as he would go on to win the scoring title in 1987-88 as well as his first Most Valuable Player Award. He was also named the NBA Defensive Player of the Year in 1988. Jordan was named the NBAs MVP again in 1991 and 1992. By this point, in the early 1990s, Michael Jordan was a household name and perhaps the most recognizable athlete in the world. In 1993, Jordan shocked the world when he retired from the NBA to pursue a career as a professional baseball player. Jordan was an accomplished baseball player in high school and chose to pursue his dream after the surprising murder of his father in 1993. Though he signed a minor league contract with the Chicago White Sox organization, Michael played the 1994 season with the Birmingham Barons before ending his dream and returning to basketball. In 1995-96, the Bulls dominated the NBA posting the best record in the history of the league (72-10) with the additions of Hall of Famer Dennis Rodman and All-Stars Ron Harper, Steve Kerr and Toni Kukoc.

He also led all players eight times in playoff points and seven times in field goals. Jordan retired a second time after the 1998 season and became part-owner and President of Basketball Operation with the Washington Wizards. In 2001, however, Jordan again came out of retirement, giving up his stake in the team to play two final seasons with the Wizards.

Throughout the 2002-03 seasons, Jordan was celebrated around the league as he made his final appearances in stadiums across the US and Canada. Jordan played his final game in Philadelphia in 2003. From the very beginning, Michael Jordan partnered with NIKE to create a worldwide brand, "Air Jordan", that far surpassed those of his contemporaries, and everyone wanted to Be Like Mike. The Air Jordan brand became synonymous with basketball and Michael the king of the court, or His Airness. In 1996, he was the star subject in Space Jam, a Warner Brothers animated motion picture.

Jordan played on two United States Olympic Basketball team that captured gold medals in 1984 in Los Angeles and 1992 in Barcelona as a key member of the Dream Team. Jordan finished his stellar career with 32,292 points, 6,672 total rebounds, 5,633 assists, 12,192 field goals, 2,924 turnovers and 5,633 steals. Michael Jordan was inducted into the Naismith Basketball Hall of Fame in 2009. Michael Jordan became the majority owner of the Charlotte Bobcats in 2010, making him the first NBA player to become a majority franchise owner.

Must own and great collectible for any NBA, Chicago Bulls and Michael Jordan fans and collectors. A fantastic item as a present, for a birthday or holiday. There is no Kareem Abdul-Jabbar in the 1989 Fleer Basketball Box - sorry for the mistype.

The item "1989 FLEER BASKETBALL BBCE WRAPPED BOX, 36 PACKS, MICHAEL JORDAN, MINT CONDITION" is in sale since Monday, January 4, 2021. This item is in the category "Sports Mem, Cards & Fan Shop\Sports Trading Cards\Basketball Cards". The seller is "spookyexpress" and is located in Port Saint Lucie, Florida. This item can be shipped worldwide.